Thorsvik Hereford is a Hereford farm in Southern Finland. In 2020 the farm is home to some 60 cows. 80-90% of the herd is breeding cattle, the rest are for meat production.

The Thorsvik farm was first bought to the family by Harald Herlin in 1912. During this time, the farm concentrated on dairy production. Harald’s son Heikki bought the farm in 1941 after his father passed away. Thorsvik is a part of the so-called Porkkala area which after the World War II was under soviet jurisdiction up till 1956. When the area was restituted to Finland, Heikki’s son Pekka, with his wife Kirsti, started to farm Thorsvik. In the late 1950’s more property was added to the farm when Pekka and Heikki bought the nearby Abramsby farm and part of the Finnby farm. The first 30 Hereford heifers came to Thorsvik from Sweden in 1975, making Thorsvik one of the first Hereford breeders in Finland. Tiina and Antti Herlin took over the responsibility of the farm in the fall of 1988. Soon after this Thorsvik started marketing beef in addition to breeding animals. In the mid 1990’s some valuable land was sold to be kept as a national nature reserve, and some more land was bought from the neighbouring Danskarby area. In 1993 Thorsvik started to breed also pure Aberdeen Angus, in addition to the Hereford cattle, but the Angus herd was sold in 2006, and today Thorsvik is once again concentrating on Hereford breeding. Angus bulls are still used in meat production. In 2010’s more land has been bought from the Porkkala area. 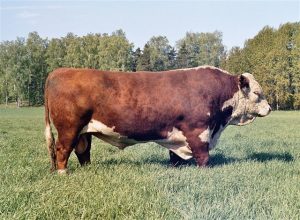 Our tradition has been in reliable breeding stock. In the future we will continue to breed healthy, well growing Herefords. Performance of our animals is our first priority. We took part in AHA (American Hereford Association) total performance recording system in the late 1980’s and when the Finnish Animal Breeders Association also started to use the BLUP method in the early 1990’s, we concentrated using their system. Our animals have been successful in the annual performance rankings of beef animals in Finland. The second part of performance comes from show ring: our sound animals have won national championships almost 20 times. You will find the animals currently on sale here. Unfortunately the page is only in Finnish.

Our cattle grazes on natural pastures from May to October. Beef from Hereford and Hereford-Angus cross is dark and marbled. You can check the availability and place your orders at thorsvik(at)thorsvikhereford.fi. You can also inquire about game meat and firewood which are on sale seasonally. 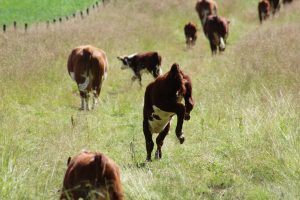 See more of our cattle and farm life in the photo gallery. For additional information on the animals, the farm, or buying our quality Hereford meat, do not hesitate to contact farm management. 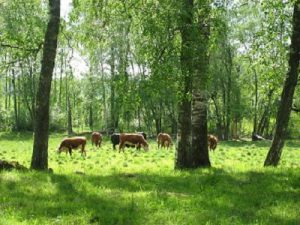